This event took place in August 2008, when I was not aware of the existence of blogs and even less that I would be writing one! It took place at our farm in Salta. 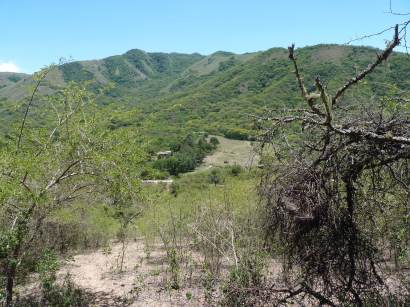 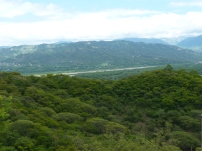 It all started with the death of a steer at a neighbour’s farm on the 17th of that month. The animal’s hide was removed on the 18th and left to rot. Over the next couple of days a number of Black Vultures (Coragyps atratus), Southern Crested Caracaras (Caracara plancus) and Chimango Caracaras (Milvago chimango) were seen feeding on it during the day. On the 20th we saw a fox and a tawny wild cat on the road, near the carcass but we were not able to identify them. As things were getting interesting and as we were used to waiting for hours for predators and scavengers at carcasses in Africa, we made a point of returning that night to see what could spot.

At about 21:30hs my wife and I drove to the area and pointed the car headlights towards the carcass, as unfortunately we did not have a spotlight. While I was maneuvering to get the best illumination of the dead animal, my wife -already known for her keen eyesight- said almost shouting with excitement “There is a large cat feeding!” I stopped the car and brusquely moved towards her seat to get a better angle.

What I saw left me amazed. At about 30 metres from us a large cat was crouching on the other side of the carcass, apparently feeding on it. It looked at us three times and bounded off towards the bushes. As we could not follow it with our lights, we could not see if it was spotted or not. What we both agree is that it was a large cat (at least the size of a large leopard) with a rather sizeable and rounded head that we saw clearly as it stared at us. That was it! Although we both knew that seeing a jaguar (Panthera onca) in this area was extremely unlikely, we were both convinced that this was what we saw.

We knew that the chances of seeing it again that night were not high and, after a while, we returned to the farm, about 1.5 km away. We were so excited that we invited relatives staying with us at the time and our children to come back to the spot with us but failed to see it again!

When I spoke to our neighbor about this, I had the feeling that he thought I was joking but finally the concept sank in and he considered it as an impossible occurrence. After searching on the Internet I came across a publication that dealt with the distribution of the Jaguar[1] and decided to contact the author.

Below I translate our exchange.

Maybe this message surprises you but I have a farm in El Gallinato, Salta and wished to consult you about the possibility of having seen a Jaguar in this area. The coordinates of the place are: 24°40′ 23.10″S and 65°21′ 35.99″W.

In this place in August of this year a cow died and, aware that in Africa carnivores are spotted many times feeding on dead animals at night, we went with my wife to see what was feeding on it and we were surprised to see a large cat with rounded ears and green eyes that looked at us a couple of times, ate a bit and left. Regrettably we only had the car lights and a small torch that did not help us much to see the body. It looked rather dark but we do not know if melanistic specimens are present here or not. Around this area we have already seen wild cats and a puma but we do not publicize this to avoid hunters finding out and finishing off the few that may be around. Of course we returned to the carcass the following night but we only saw dogs feeding.

As I found your work on the distribution of the jaguar in the Argentinian North West, I thought that you would be interested in this information. I would also like to know if what we saw could have been a Jaguar or if it is that we are too old and having visions!!! Maybe some day when we are in Salta we could meet.

His answer came the following day:

Many thanks for your message. Regarding your query, regrettably, I must tell you that is unlikely that it was a jaguar, I do not say impossible as one should never loose hope that their distribution will increase again to its original area which included the El Gallinato. But I do not think that nowadays it could have been a jaguar.

Regarding the article you mention, (although old) you would note that sites close to El Gallinato are mentioned (the mountain road towards Jujuy). These are data on footprints and some other signs, but regrettably 8 or 9 years have passed during which we cannot find new evidence.

I reside in Vaqueros and travel frequently to Jujuy (I am from there) in the mountain road. At the moment I work with jaguar and other cats (that are just as important as the one you saw) in several places, but mainly in the Yungas and Andes highlands.

If you wish when you pass through Salta, you could write and we could talk about this, about things that need to be taken into account about the predatory attitude of the different species, and I could also give you some useful material.

I thank you for your interest and initiative.

Many thanks and I remain at your disposal for any doubts you may have.

Although we had a couple of additional e-mail exchanges, I have not yet met Pablo. I was in Rome at the time of the exchanges and in the past and present our visits to the farm were (and are) always short for time as there is always other more urgent and or important things to do!

Thinking back, perhaps the situation called for the probably first and last use of my “yaguareté” (jaguar) caller that I had acquired earlier in the Beni of Bolivia with the absolute guarantee (from the seller!) that it would attract jaguars! Luckily, the contraption remained forgotten in a corner of our farmhouse! 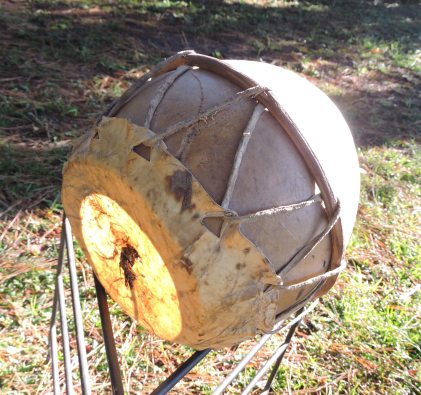 The contraption has a waxed leather string in the middle that when fingers slide through it produces a grunt that is amplified by the box that mimics a call by a jaguar! 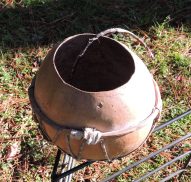 Incredibly ten years have passed since the sighting and, although I take in what Pablo said, writing this post brought back the memories of the large cat we saw that night whose identity will probably always remain unexplained for us!