We have a few macadamia trees at home that have not yielded very much for luck of water. Last year we had very good rains so we were rewarded with a good harvest and we are busy drying them under the sun so that I can then proceed with the rather time-consuming exercise of opening them. 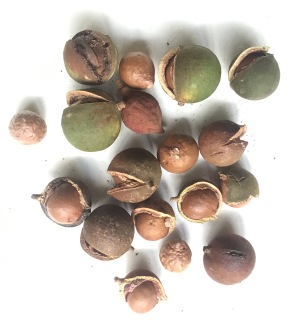 Dry nuts ready to be cracked.

Macadamia’s shells are extremely hard and, after trying various methods, I have resorted to a vise in the workshop that so far is still working until its thread gives in!

Some time ago we have discovered hollowed out nuts in the garden and we could not believe that an animal could be so powerful as to gnaw such thick and hard shells! Eventually we found lots of empty nuts near a large hole and realized that we had a colony of Southern Giant Pouched Rats (Cricetomys ansorgei) [1].

After a while we stopped seeing them and they disappeared. Apparently they moved off our house one night in a group and entered under the gate of a neighbouring house but I was not a witness to this Pied-piper of Hamelin-like migration! 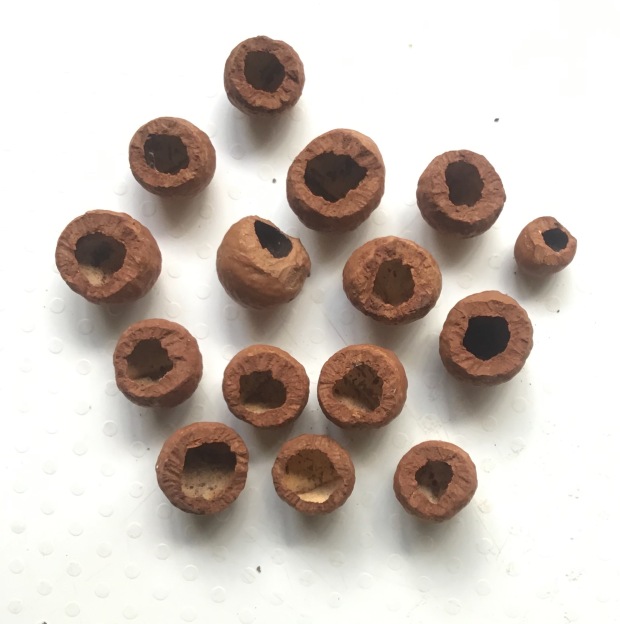 The empty shells after the rats ate the tasty inside.

More recently, we noted that the nuts we were drying were being peeled from their green outer cover and taken away whole from the sunning box. We “smelled a rat”!

A search up and down the garden was organized and, eventually, a large hole was discovered at the farther corner of the garden. Suspecting that the giant rats were there I set up a camera trap pointing towards the suspected burrow and this is what I got:

We confirmed our fears as the various videos taken showed one rat at a time either entering or leaving the burrow. As I was curious to see how many there were, I decided to put some food hoping that they would gather to feed. Although I got over 180 ten-second videos, I still failed to get a rat gathering! However, I got a few that prompted me to write this post!

I have selected a few that I find interesting and/or funny. Please note that one is eating a few carrot pieces on the ground while the others are chewing a chunk of (delicious for humans at least) butternut hanging from a bush, the idea being that they would not drag it into their nest!

This giant rats are widely distributed in mainly tropical regions of southern Africa, notably Zimbabwe, Kenya, Tanzania, Zambia, and the Democratic Republic of Congo. I first saw them in Monze, Zambia while driving on the main road and I had difficulties stopping my Zambian workers from jumping from the moving vehicle to catch them as they consider them a delicacy!

Later, also in Zambia, Bruno, a colleague from Belgium, invited me with a surprise roast that happened to be delicious and it was a giant rat -as tasty as a piglet- with baked potatoes (tasting like potatoes!)! Giant rats were very abundant in that area at the time and I am sure contributed to food security of the village where the project was based.

Giant pouched rats are named after their large cheek pouches and they are only distantly related to the true rats. Recent studies place them in the family Nesomyidae and not in the Muridae as they used to be [2].

They are able to produce up to 10 litters of one to five young per annum and they are nocturnal and omnivorous with special taste for palm nuts and, as we have experienced, also for macadamia nuts. Interestingly, they are hind gut fermenters and coprophagous, producing pellets of semi-digested food that are consumed.

They are not only easily tamed as pets but useful for detecting land mines as they have an excellent sense of smell, particularly sniffing TNT while being too light to detonate the mines! But this is not all. They are also being trained to detect tuberculosis by smelling sputum samples. This procedure is faster than the normal diagnostic test and remarkably increases the sample processing. [3]

So a few disappeared nuts ended up producing an interesting story and  I am now positive that we  have a colony of rats (being fed on expensive macadamia nuts) that could potentially be bred to remove mines and improve human lives!

I regret now having eaten one (and liked it!) and I will not do it again!

[1] I am not a rat taxonomist so I base my identification more on distribution and abundance than on their morphology. The other possible species in Zimbabwe would be C. gambianus but the whole pouched rat taxonomy is under review. See: Olayemi, A. et. al. (2012). Taxonomy of the African giant pouched rats (Nesomyidae: Cricetomys): molecular and craniometric evidence support an unexpected high species diversity. Zoological Journal of the Linnean Society 165, 700–719.

I believe this to be an interesting observation. Bushsnob