During earlier visits I have seen some of the big five in Rome and I described one of them already [1]. During our brief visit this month we were treated to a nowadays rare sight: an endangered white rhino under the Arc of Janus at the Via del Velabro, very close to the church of Santa María in Cosmedin where the famous Bocca della Veritá (Mouth of Truth) mask is located. 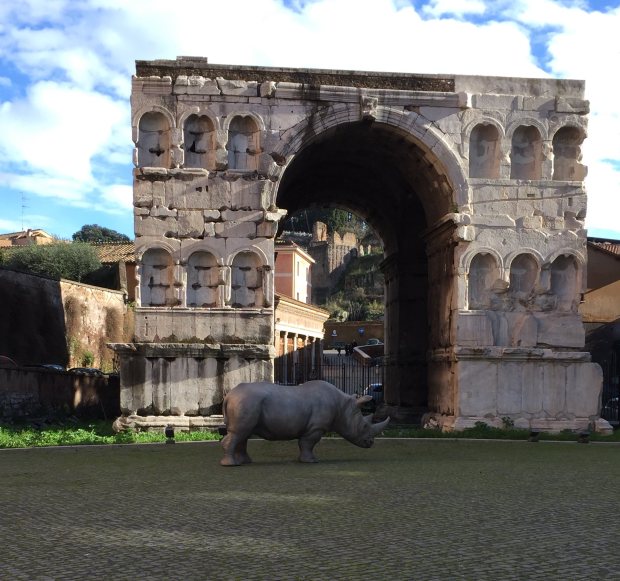 The Arch of Janus, seen behind the rhino, is the only quadrifrons [2] arch in Rome. This arch has four facades and it was built at an important place and crossroads in antiquity, where the slope of the Palatine Hill (where most Emperors lived) coming from the centre of Rome met an important port on the Tiber River.

Interestingly, the experts say that the structure was built from pieces of other ruins, including the marble slabs that cover it. This construction method has enabled archaeologists to date the structure to the second half of the Fourth century.

Unfortunately, following an explosion that took place in the area in 1993, the arch was fenced and remained inaccessible to the public since then and it also remains unrestored. But now it has a rhino inside the fence…

The white rhino is there as part of a drive by the Fendi Foundation to give this less known area of Rome some visibility through the promotion of art at their Palazzo Rhinoceros nearby [3].

Hopefully, the presence of this very real-looking rhino that somehow surprised me will also promote its conservation!

[2] In Greek “tetrapylon”, and in Latin “quadrifrons”, is a kind of ancient Roman arch of cubic shape, with a gate on each of the four sides. These kind of arches were generally built at crossroads.