Working with certain ticks can be dangerous. As an example, it is possible to contract the severe Crimean-Congo Haemorraghic fever while working with its vector Hyalomma spp. Luckily, most of the work we carried out at the International Centre of Insect Physiology and Ecology (ICIPE) dealt with the Brown Ear tick (Rhipicephalus appendiculatus), vector of Theileriosis, the most important and deadly cattle tick-borne disease found in Africa but not known to transmit diseases to humans. Over the many years my colleagues and I worked with this tick, we never had an instance of sickness that we could attribute to them.

Heavy infestation of Rhipicephalus appendiculatus on a calf ear.

Ixodid (hard) ticks such as the Brown Ear tick bite but do not sting. They do not bite like other insects either but rather they attach themselves in a usually painless way so that you do not know about them until sometime later. Argasid (soft) ticks do bite, feed and go away to their resting place to come back and feed again after digesting the blood meal. 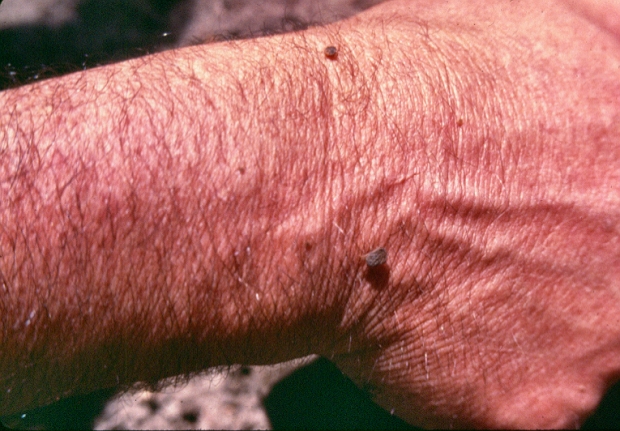 Although we did not get any disease signs, we did experience tick bites very often. We got ticks on while walking in the field and during our laboratory work during which we needed to handle them very often.

Although the adult ticks did not attach readily to us, the nymphs and larvae did. Their preferred body regions were areas where there was hair such as neck, armpits and genital area but the larvae picked while walking on the grass would mainly stay on your ankles (pepper ticks). Eventually I became hypersensitive to their bites that produce me intense itching that makes me scratch their bites intensely and often breaking my skin! 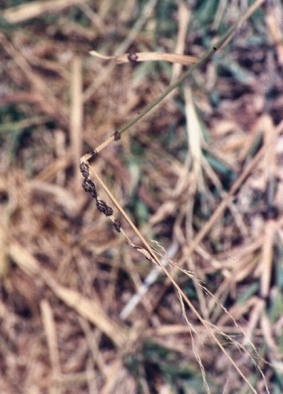 Counting immature ticks was a normal procedure for our work and -at the time- the procedure consisted in placing them on a white smooth table where immediately they would start moving. Being attracted by CO2 they would aim for you straight away and you needed to work very fast to be able to catch them -with an inverted tube- before they would get at you. Unfortunately and rather inevitably a few would break through your defences, fell on your lap or crawled up your arms with the consequence that later you would find them attached to you in the various places mentioned above!

Although, as I mentioned above, adult ticks generally did not attach to you, there were exceptions with certain species that caused the unfortunate incident that happened to a visiting colleague.

After a day of fieldwork counting and collecting ticks from local domestic animals in the Mbita Point area [1], we came back to our bungalow for a deserved shower before our dinner. I noted that John (not his real name) was walking with his legs slightly separated as if suffering from nappy rash but I attributed to the many hours we spent kneeling down searching for ticks and -with some effort- refrained from making any rude remarks!

It was only after the shower that he came to me and, very seriously, told me that he had a problem. This took me by surprise but nothing prepared me for what would come next. “I have a tick attached to me and I cannot remove it!” and, before I could comment he added, “because it is in a place that I cannot reach” and then added “do you think you can pull it out?”

Having suffered various tick invasions to my privacy, I immediately imagined where the invader was and -albeit unwillingly- agreed to do it. So it was that I ended up with my naked colleague spreadeagled on a bed!

I will omit further details of the intervention except to say that I did lock the door as I suddenly realised that the excuse “I was looking for a tick” if found rummaging my friends privates to a visitor would not be very credible! Fortunately, no one disturbed the procedure!

It was good that the trespasser was an adult female that had already started to engorge and it was easy to find and to remove it intact by turning it upside down before pulling it out. At that time I did not possess my “tick remover” tool that was sent to me as a present from the manufacturers. 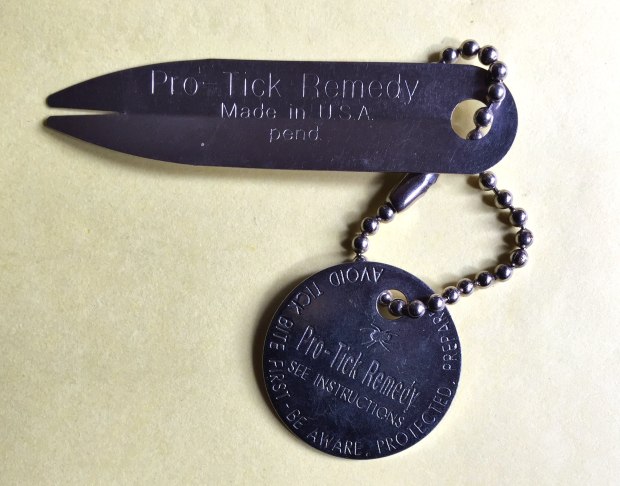 A “tick remover”. Please note that I neither recommend or do not recommend this product that i have never used.

Leaving mouthparts’ fragments embedded in the skin could have still caused further discomfort in such delicate body region! We were both very relieved with the outcome and celebrated the de-ticking with a couple of beers over dinner.