After the initial rather intensive contact with Matt, a time of waiting followed while settling down at Muguga House. I saw Matt less often as he was busy running the Tick Programme. It was time for waiting, he had said earlier, as possible collaborators needed to return from their home leave when the European summer ended.

I was still busy! My attention was fully dedicated to my wife’s arrival as this offered some logistical issues both locally but also en route. The local issues were easier: obtaining a more comfortable bungalow at Muguga House and persuading a colleague to provide us with night transportation to and from the airport as her arrival was late at night. The issue of her Visa was a serious concern, though. For some reason better known to the intricate recesses of international diplomacy, Uruguayans get a Visa at the airport in both Kenya and South Africa, a rather convenient procedure. All very well then. Not so: my wife needed an overnight stopover in Johannesburg and needed a Visa for South Africa.

Flight connections were not as frequent as today. Nothing wrong with that you may think. However, I had learnt while in Kenya that, because of South Africa’s apartheid being in full swing at the time (1981), passengers arriving in Kenya with their passports stamped by the “racist regime” would be denied entrance and sent back! This was part of the blockade being imposed by all African countries to South Africa at the time.

I could expect no assistance from the Embassy of Uruguay in Kenya as there wasn’t one![2] There were only three Uruguayan embassies in Africa: Egypt, Nigeria and South Africa. Aware of that there was no South African High Commission in Kenya I decided to first see the airline and then, if all else failed, to call the Uruguayan Embassy in South Africa seeking help. Cellphones did not exist and landlines between Muguga and Nairobi did not work very well so the best thing to do was to go to Nairobi to meet the airline, Varig at the time.

As her arrival was imminent I decided to travel to Nairobi the following day using public transport, no doubt encouraged by the experience I had on arrival[3]. The trip consisted in finding a way from Muguga to the main road and then another one to Nairobi, both ways.

The trip started well as I was lucky to find transport straightaway and got to the main road in good time. I joined a crowd of waiting passengers and, soon enough, a matatu[4] was waved down. It was a VW minibus, the brand that at the time dominated the minibus world in Kenya.

My hopes of a good ride in the front evaporated fast as this was apparently reserved for women and friends and currently overflowing. With moderate pushing and shuffling I entered, after paying the tout the necessary fare. “Not too bad” I thought while finding a seat in the back. “At least I will learn the dynamics of public transportation”. I also thought that the trip would have been fast as the bus was pretty full -by my standards- already. Nothing could have been more wrong! People needed to get out but many more got in until there were over twenty people in the back (I cannot say how many there were in the front seat as visibility was severely impaired!). Amazingly, we still accommodated a few more before we reached the Post Office stop at Nairobi city centre.

I literally popped out of the jam-packed bus and walked to the Varig office, almost on a “high” due to the sudden increase in oxygen levels, despite Nairobi’s high altitude! I hasten to add that, despite the large number of people and the scarcity of water in the rural areas, there was no more human body smell in the bus than in any minibus or lift in my country or the UK for that matter!

The Varig representative, fortunately, was not at all concerned by my predicament. “All you need to do is to ask your wife to get her Visa on a separate paper” she said. And she added, “She gets that paper stamped, makes sure that her passport is clean when she presents it to Immigration here”. Those were the tricks of countries under UN sanctions! The rather fast resolution of the Visa issue left me with time in my hands so I decided to look for Matt at ICIPE and I was lucky to get a most welcome return ride all the way to Muguga with him. He was rather surprised that I was so grateful and, after explaining the reasons, luckily he agreed to approach FAO in Nairobi to get me a vehicle. A rather good outcome from the matatu ride!

My wife’s travel went without hitches and I soon had her with me at Muguga House. Her arrival coincided with the return of most of the potential collaborators and I had the chance to meet some of them as well as do a lot of reading about tick and tick-borne diseases, working at the KARI library, an excellent source of historical research documents on the subject. I prepared a new work plan everyday, only to abandon it as my knowledge augmented!

Over the following days Matt took me for a round of official meetings to meet several people relevant to my future stay in Kenya. We had a rather difficult and cold meeting with the Government Veterinary Department and I could detect negative vibrations. In the end I was given the green light. Matt did not enjoy the meeting and he was rather short-tempered for the rest of the day. I, conversely, was happy that I was in Kenya to stay!

We also met the FAO Representative to update him on my plans as well as to plead for transport. Luckily, his response was positive and he asked the Administrator to identify a suitable vehicle for my use. This produced a VW Kombi, redundant from an earlier project, that was allocated to me for private as well as official use! An added advantage was that it had one of the most coveted items: a red -diplomatic- plate, a road opener. So we were finally mobile. The new car was ideal for us. Although it did not have 4WD, it had the necessary road clearance to take us all over Kenya. 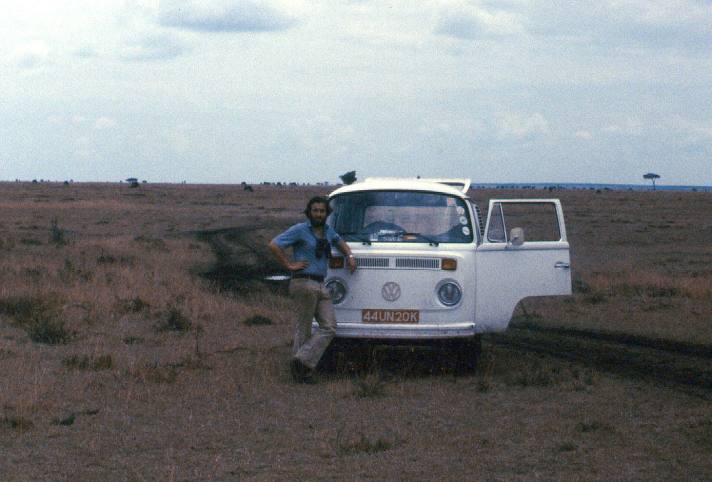 Returning from a muddy Maasai Mara Game Reserve in the VW Kombi.

At Muguga we met the Director of KEVRI, a highly qualified, very friendly and smooth Kenyan that was very welcoming. He was the Chairman of one of the two most popular soccer teams of Kenya and very involved with soccer in the country. We connected immediately when he learnt that I was coming from a country with such a good soccer pedigree and, although we talked about my future work and how collaboration could be strengthened, the main topic of our first meeting was soccer! Among the issues we covered was the possibility of me getting a Latin American coach for his team! This was the beginning of a friendly relationship through which I got very good support at work and also shared a few soccer matches with him.

The final of the “obligatory” meetings was with the Director of ICIPE. He was a highly educated and suave Kenyan Professor that was difficult to meet as he was constantly in meetings, running the Centre and meeting Donors and partners. He was pleased to see me and gave me valuable directions on what my situation as a Fellow within ICIPE would be and, of course, directed me to his Deputy for further issues. During the meeting he was very clear that I was awaited at Rusinga Island as ICIPE’s new research station at Mbita Point needed scientists settling down there. After the meeting was over, I learnt from Matt that the Director’s home area was precisely Western Kenya and that was the reason for his keenness for me to get there. Apparently the die was cast!

After these meetings I saw Matt less frequently for a while. Luckily Robin, the ICIPE ecologist, returned and I started going to the ICIPE laboratory at Muguga to be with him and learn. He was a very kind man, graduated in Oxford, who never refused to answer my questions and be of help. I was really lucky to find him and with him I learnt most of what I know about ticks and their ecology!

I had been in Kenya for about two months by now and I still did not know about what I would be doing so, concerned, I decided to ask Matt what was happening. The opportunity presented itself when he came to Muguga for a meeting. I managed to get a moment alone with him and asked him about the situation. Matt’s reply left me cold: “Julio, if you are not happy with the situation you tell me now and we cancel all arrangements and you go back to Uruguay and nothing happens”. I was shocked and worried but perhaps I had insisted a trifle too much or perhaps he was having a bad day as his mood sometimes seemed to swing. However, as the FAO Fellowship was all I had, I replied that I trusted him and would wait. I said: “Matt, the idea is not to leave but to let you know that I am worried for the delays”, I answered. “I understand your problem but this is Kenya and things work differently and at a slower pace. This should be clear to you from the start, otherwise you will not be able to work here” he said, in a way that was meant to close this uncomfortable encounter. I got his message and began my adjustment process to Kenya, Africa and to Matt’s ways and moods!

A few days later Matt came to see me at Muguga. He was in a jovial disposition. “Julio, Alan is back and we are meeting him now” he said. The meeting was timely and good. Alan was aware of my arrival and very keen to work with me as he saw the collaboration as very promising. The various work options were discussed and it also transpired that Matt had been under great pressure from the Government regarding my work as the latter had different ideas[5]. There had also been some administrative difficulties between FAO and ICIPE regarding the administration of the Fellowship’s funds. However, it had all been solved by now and we were, apparently, ready to go.

Matt was as idealistic as Alan was practical so they were a good combination: ideas and execution. I liked Alan from the start. During the meeting it was agreed that I would do some work at Muguga itself as well as field work. We would therefore visit Mbita Point and Rusinga Island with Matt. On the way back to Nairobi, we would take the opportunity to visit the ranch in the Transmara where Alan had his research on immunization. Finally, the return would be across the Maasai Mara Game Reserve, an added bonus.

It was agreed that, after that visit we would be in a better situation to take a decision on my future research work. In a way they kicked the ball forward! Nevertheless, I was happy to see movement at last. We agreed to leave as soon as possible.

[2] A complication that affected our lives and I will refer to in a future post.

[5] A couple of years later I learnt that the Kenyan Government had their own candidate for the FAO Fellowship that I got and my appointment did not go down well.