While staying at Muguga House (see: https://bushsnob.com/2015/06/30/life-and-work-in-kenya-muguga1/) I used to upset Richard with my parrot stories from Uruguay. I later regretted having done so when I discovered that he owned an African Grey parrot!

Richard found us a house in Tigoni where we moved after a few months living in Muguga House, once we got our VW kombi to move around. We were neighbours for about one year and we shared time together. So, when Richard’s time to go on annual leave came, we agreed look after his house and, more importantly, its occupants.

The house in Tigoni and our VW kombi, our all terrain vehicle.

Richard was very proud of his collection of African fresh water fish that he kept in tanks all over his sitting room area and, of course, he kept his parrot! The fish required feeding and cleaning and, in addition, the parrot required some entertainment as it was rather neurotic and pull its feathers! Luckily, his housekeeper would take care of the daily chores and all we needed to do was to get the necessary food and, whenever possible, keep the parrot amused by talking to it. This consisted of exchanging the phrase “silly old parrot” and submit to its loud and almost deafening whistling!

As it is customary in these cases, Richard gave us a briefing about some special details needed and also about a last minute addition to his menagerie: a small terrapin that he had found during a walk that also required attention. Although the new beast occupied its own tank and it should have been easy to keep, he was worried that the housekeeper was not familiar with it and asked us to keep a special eye on its welfare.

We listened patiently to all his recommendations and reassured him that all was going to be well so, the following day he left for one month to visit his family in the UK and we added the monitoring of his house to our ongoing activities.

We kept visiting his house daily at first but when we saw that things were going well, we relaxed our visits as we gained more confidence. Very soon there were only a few days for Richard to come back and we were pleased with ourselves as all was still in order. Clearly, we celebrated too early! Two days before Richard’s return his housekeeper, looking sick with worry, came to see us after we returned from work.

“The parrot is gone”, he said almost crying and not daring looking at us. As these were really bad news, we sprang to action immediately and walked with him to Richard’s house while we interrogated him on the way. Apparently, the parrot was gone since the morning and, as he could not contact us the poor man lived through agony until we returned in the afternoon. He said that he had looked for the feathered one all over but failed to find it! 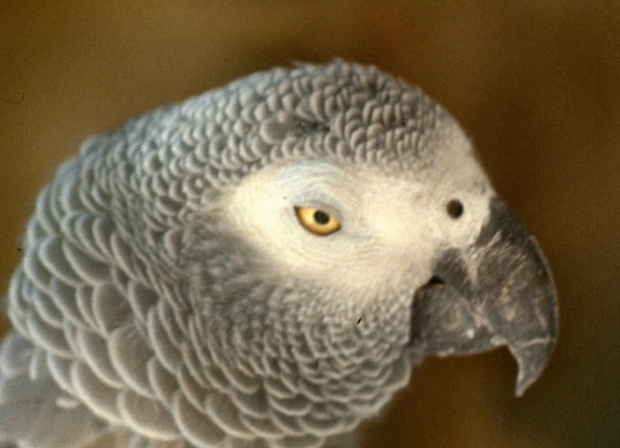 A bad picture of the parrot!

We fruitlessly searched the house from top to bottom and found no signs that the bird had been there and the investigation gave us no useful clue on where or how it could have gone out of the house. So our search moved to the rather large and bushy garden, open towards the river that run through the valley below, the same valley where I had my earlier encounter with the “siafu” (See: https://bushsnob.com/2016/04/19/fire-down-below/ ).

We were not very optimistic but continued with our search!

Searching for the missing feathered one. (Sorry for the bad shot but I was shaking with worry…)

That day darkness came faster than we wished and eventually we found ourselves in darkness without finding it or having a reply to our “silly old parrot” calls directed to the apparently empty bushes! I do not wish to know what anyone that heard us saying that with a parrot accent could have thought! But that is only an afterthought of today as the situation then did not allow for these kind of mental exercise!

After searching for about two hours in the dark we gave up and, with a heavy heart, returned to our house. Clearly a hand-reared parrot used to live in a cage had a very slim chance of making it through the night where we knew mongooses, genets, civets and probably other predators inhabited. We had a somber dinner while we discussed the issue and prepared for the worse, particularly how to break the bad news to Richard that was arriving in two days time!

The following morning we did not go to work and we asked Peter -our housekeeper- to join us in the search. We started looking as soon as there was daylight, admittedly more as a token gesture than with a real hope of finding our -hopefully still feathered- fugitive! While walking towards Richard’s garden, I still kept thinking on how I would break the bad news to him!

We decided that our chances of success would be higher if we separated and each one of us took an area to search while shouting “silly old parrot” again and again! At about mid-morning and after a few hours of walking around in the bush, it was Mabel who heard something and called us. We ran towards her and, as we got closer we heard “silly old parrot” in the inimitable voice of the missing parrot. There it was, perched low from the ground on a small bush, preening itself and removing a few more feathers from its already almost bare belly!

It seemed that the parrot had spent the night at about 60cm from the ground and survived! We soon grabbed it and brought it back to its cage where we left it with renewed recommendations to the keeper. We left for our house, quite relaxed and happy about our find.

Finally, the day of Richard’s return arrived. Still pleased with our parrot success, we went to his house to have the last check on his wildlife and wait for his arrival.

Then the last act of this play unfolded…

All fish looked fine but when I checked the terrapin tank, I saw it rather quiet and unresponsive to the touch! It was dead. This was an unexpected blow as we had seen it the afternoon before looking fine! Rather upset I took it out of the water almost at the same time that we heard Richard’s car arriving!

I was in a tight spot with the terrapin in my hand! Those of you who are familiar with these beasts would know how they smell when alive and you can only start to imagine how they stink when dead! So, I moved fast to the toilet to both dispose of the body and the waft from my hands while Mabel greeted and entertained Richard.

I tried to flush the small reptile about three times unsuccessfully and eventually, in desperation, wrapped in toilet paper and stuffed it in my pocket while, and washed my hands hoping that the soap would do its job.

So, with my best possible smile I emerged from the toiled to greet Richard and to break the news of the terrapin’s demise. Luckily, he took it well and, a few minutes later, after leaving him to settle in his house, I managed to bury it in our garden to close our rather poor experience at housekeeping!

See if you can spot this one. Please, do not look too much if you fail to find it in a few seconds… 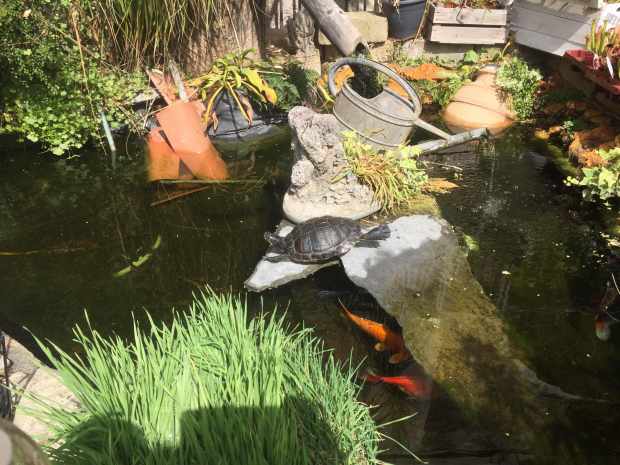 This one is really a different “Spot” as it is quite clear that we have a terrapin in front of us. However, have a good look at it.

I did not notice anything strange until my son, said “look at the terrapin doing Yoga”!

It was rather hot in Roma so the beast was sunning one leg at a time at leisure!

A loud “crack” woke me up from my after lunch nap, or at least I think that that was the reason for the interruption of my daily ritual (well, I must confess that sometimes I wake up myself up with my own snoring but that is another matter…).

In any case, when I regained my faculties after a while (a slower process as you grow up), I did not hearing it again but I became aware of some loud splashing noises nearby. My son helped me to focus and informed me that -apparently- a croc had caught something and that our campers next door had seen the action.

I had already made contact with our neighbours -coming from Zambia- as soon as they arrived earlier to warn them about the viciousness of the baboons at the campsite that forced us to get a guard as described earlier. In fact, despite my cautioning, they still suffered the consequences while they were away on their first game drive, although they had taken the normal precautions that are usually enough!

So, I went to see them to find out what they had seen. Luckily they had not only witnessed the event but also taken pictures of it! They had detected the commotion in the water and heard the noise. A crocodile had caught a rather large terrapin and, after kit was trying to devour it. 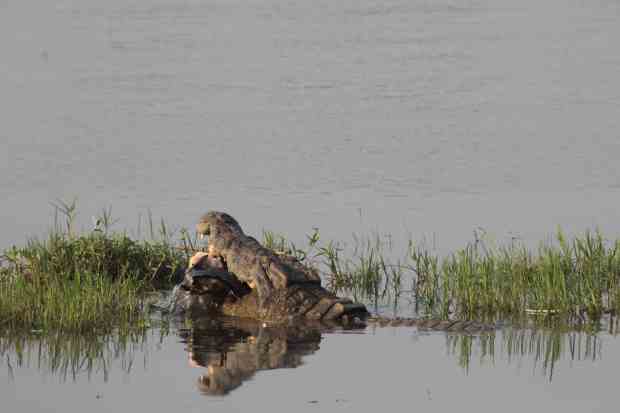 The crocodile eating the terrapin. Picture by Eloise Wells.

The event was a surprise to me as we usually see both terrapins and crocodiles sharing their water territories ignoring each other! Perhaps the terrapin was already dead when the saurian found it? We will never know. 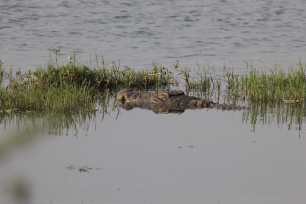 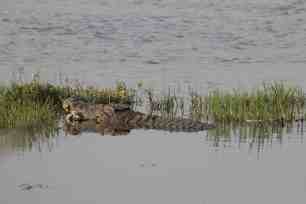 The crocodile resting after trying to swallow its prey. Pictures by Eloise Wells.

The victim was rather large but eventually the croc had managed to break its carapace -the crack- and it was busy trying to swallow by the time I watched. Although I could not help feeling sorry for the unfortunate victim, it was an interesting event, worth mentioning.

The crocodile was busy for a few hours until it moved off and we lost it for a while. It reappeared later a few metres downriver with its mouth closed so we believe that it had already consumed its prey. 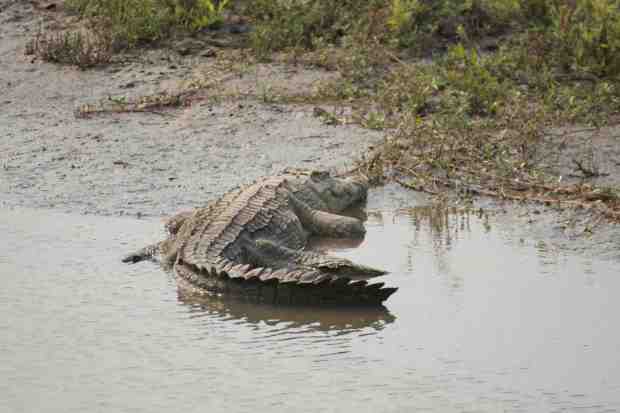 The crocodile after the event. Picture by Julio A de Castro.

Believing that only to write about this would not have been enough, I asked our neighbours to let me have some of the photographs of the event for this post and they kindly did so. Thanks to their generous contribution I am able to share them with you as the story that, without pictures, would not have been the same.