The final day of our stay at Mana Pools we drove all morning and hardly saw any mammals. Our drive started towards the west, following the river frontage (from right to left in the map below), towards Vundu camp. Although the views of the river in that area are really beautiful, after a while we decided to take another road in a southerly direction, towards the Kanga pan area (outside the map). Although the sighting of  crowned eagle lifted our spirits for a while, our luck did not change.

Map of the Mana Pools area adjacent to the Zambezi River.

Our last hope of finding some interesting action was to re-visit the “carnage” at Long pool of the day before but our bad luck continued! Professional-looking photographers had moved in and probably paid some good money to film the birds so we did not wish to interfere with their work and drove on and back to our lodge.

The view from our lodge.

To recompense ourselves for our rather poor morning performance we decided to go for a late hearty English breakfast, also known as brunch. We enjoyed bacon, scrambled eggs and fried tomatoes. The siesta under the trees that followed recharged the “morale batteries” and, by 16:00 hours, we went out again. This time we headed towards the Nkupe campsite and the Zambezi shore near Mana mouth where earlier we had some interesting sightings. 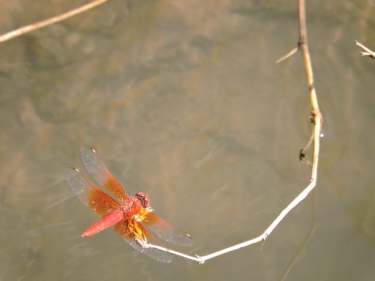 When you start getting carried away by watching Matabele ants (Megaponera analis) and photographing armoured crickets and dragonflies you know that Mana is on one of the occasions that it hides its booty from you. Clearly the park had water “up country” and most animals were spread out beyond the area that we could cover by car.

To be fair, we actually enjoyed watching the ants[1] that reminded someone of the fierce Matabele warriors of the past, hence their name. It was a rather large colony moving over the ground as a coordinated force. The major workers of this group were carrying brown capsules that were not prey as we initially thought but their own cocoons as I later learnt. One of these major workers would have also carried their queen but we did not pay sufficient attention to spot that.

Eventually we managed to see some zebra and even three shy eland bulls that quickly moved off as soon as they spotted us. Because of their premature departure we did not hear the unique clicks that are normally loud enough to be heard from some distance away. A knee tendon slides over a bone and vibrates causing the clicks. The larger the animal and the thicker and longer the tendon, the graver the sound and the higher place the animal occupies in the pecking order. The clicks, therefore, prevent fighting.

Soon the shadows started to lengthen and it was time to return to our lodge. We decided to spend the last minutes of the day checking our mail so we drove via the park’s office to access their Wi-Fi. It was close to 17:30 hours and the sun had already dropped behind the escarpment on the Zambian shore of the Zambezi.

On arrival to the office our luck turned! At the parking area we met head on with a large bull elephant and we stopped mesmerized at such a great animal so relaxed yet so powerful and potentially dangerous. Ignoring us it kept feeding as we drove within a couple of metres from it to park the car. We have had the privilege of having been close to these bull elephants before[2] but the experience is always exhilarating. 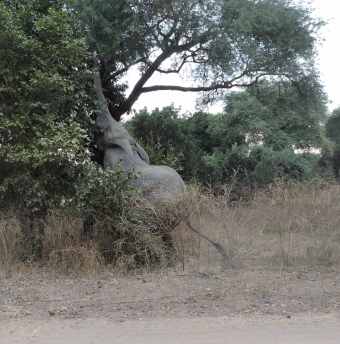 I got out of the car to watch the animal and joined onlookers from the park’s office that were also there enjoying the moment. It was one of bulls that reside around the most popular area of the park and clearly used to humans. In pursuit of good food it was performing some really funny contortions.

Boswell is probably the best-known bull elephant at Mana Pools. It has developed the ability of standing only on its hind legs while stretching an amazing length to reach the highest of branches. Although the elephant we found was not Boswell, it was probably one of its disciples as I am sure that at some stage it was actually on its hind legs though hidden by bushes!

I got carried away taking pictures and, rather carelessly, I forgot that I was photographing an adult bull elephant a couple of metres away! At one point, after removing my eye from the camera’s viewfinder, the animal was actually towering over me and I thought that I was ridiculously close for comfort and hastily retreated concerned about my bush-future! Luckily, harming me was not in the pachyderm’s mind and it continued feeding and keeping the distance that it thought prudent for both!

Unfortunately, the light soon faltered and I was forced to stop taking pictures so we parted company and we returned to our lodge. Our experience confirmed yet again the nature of Mana Pools: you can go through a frustrating day and then, suddenly, you find yourself in a unique situation that not only makes you forget the tedious drive but that leaves an enduring memory!