You will recall that on 20 August 2014 I published a post titled “A tusk task” (https://bushsnobinafrica.wordpress.com/2014/08/20/a-tusk-task-2/) where I presented the finding of ab elephant bull that, as far as I could tell, had not been identified before. I called this animal the “Balalala tusker” as we saw it near the Balalala area at Kruger National Park.

A month later in “Unraveling the tusker mystery” (https://bushsnobinafrica.wordpress.com/2014/09/21/unraveling-the-tusker-mystery/). I reported that I got confirmation that what we had seen was indeed a new tusker that “will definitely escalate him to the top of the list when the time for the naming review comes and hopefully at that time he will be confirmed as a new bull and named“.

The naming process took a while during which I kept asking the Emerging Tuskers Project (ETP) of the Letaba Elephant Hall of the Kruger National Park for progress but I had no news for over two years. When I was starting to lose hope, on 28 June 2017, I received an e-mail from the ETP that I reproduce below.

I am sure you are convinced by now I had forgotten you. I am sorry this process took so long… I finally got the media release and approvals done and I can formally tell you now that your bull is named Matlakusa.

It proved quiet an interesting story in the end, as once we had identified your bull as a new bull, we noted that with one of our other new bulls some of the submissions characteristics matched your bull better and we actually managed to split these sightings far more accurately after the great series of images you and another contributor provided so it actually helped link the two new bulls and discover a completely new bull and a new area for him as well.

Below is the link to the website as well as the info for Matlakusa (this is a summary of the info that is on file with the project), if you have any further questions please do not hesitate to contact me.

Origin of Name: ‘Matlakusa’ from tlakusa, in Tsonga meaning to ‘raise, lift up’, this is a large open pan and bore-hole, alongside the eastern border, southeast of Malonga in the Kruger National Park and links to this bull’s large home range.

Special Features: This bull’s ivory closely resembles that of Xindzulundzulu, that it is fairly symmetrical, straight and widely splayed with a shallow curve from a side profile. The left ear holds the defining characteristics that separate these two bulls, there is a R5.00 sized hole in the tip of the lobe as well as an area of damaged cartilage at the top give a large v-shaped ‘collapse’ in the ear. A very small u-shaped notch and two R0.20 holes are visible on the middle of the lobe but only at close inspection and with the ears extended. The right earlobe had a R0.50 sized hole towards the bottom of the lobe that has recently been torn and is now a u-shaped notch with a small hole towards the inner lobe above this. Other than this the lobe is fairly clean edged. A small protrusion of skin is visible on the trunk at the top adjacent the left tusk. Visible from a side profile is a growth on the left foreleg behind the leg just above the joint.

General: Initial images of this bull from Joël and Di Roerig were identified as Xindzulundzulu due to his ivory shape. Later in 2014 a full series of images submitted by Julio de Castro [1] between Shingwedzi and Balalala created a dilemma as at the time as Xindzulundulu was known to only be local to Shingwedzi and a new bull was suspected. Additional images by regular contributor Frans van Achterbergh submitted showing his left and right side allowed the defining characteristic’s to be seen and to be able to determine that there were in fact two separate bulls. This revelation allowed two previous sightings one of which was by Ian & Deirdre Outram and the other by Forum member Lion Queen both in 2012 that were both previously thought to be Xindzulundzulu but could not be confirmed as the locations did not make sense and defining characteristics in these images were not very clear. However the receipt of the 2014 submission with clearer images could confirm these identifications. Several other images placed with Xindzulundzulu’s monitoring file could now also be separated out as being those of Matlakusa and in 2015/6 it was decided that sightings of him were sufficient to name the bull confirming his status.

As you can imagine we are delighted that our contribution assisted the ETP to identify Matlakusa and separate it from Xindzulundzulu as a new tusker.

Matlakusa showing off its ivory!

We look forward to find Matlakusa again during our next safari to the KNP next week. We hope that Matlakusa will continue to live its peaceful life for many years to come and that its ivory stays with it, where it belongs!

The sighting of the large tusker described in “A tusk task” was the subject of an intense exchange of messages between the bushsnob and the Emerging Tuskers Project (ETP) of the Letaba Elephant Hall of Kruger National Park.

I supplied the ETP with all the pictures and a video of the elephant. I also reviewed the approximate location of the site where the animal was observed and corrected it to the area around Shingwedzi Rest Camp. This was done after revising our route on the day of the sighting, based on bookings and pictures (both their contents and times taken).

The ETP then studied all available information and compared the unknown tusker with their elephant database and came to the following conclusion, communicated to me on 15 September 2014:

“Thank you very much for sending the additional images and narrowing down the location it did help considerably, I did receive all 11 (pictures).

In regards to your bull the answer is perhaps not one you were expecting but nonetheless very good news in that we have what appears to be a new tusker.

This bull is definitely not Mavalanga* as neither the ear markings from the left ear that are prominent nor is what I call the “donut”, the thickening on the middle of the trunk present. I have looked in detail at the ear markings and having compared them along with the shape of the ivory with all the possible bulls that we are currently monitoring as well as the known bulls and they do not match. The location and side images you provided eliminated my only other suspected bull, so the only feasible conclusion is a new bull.

Interestingly we received a second image from a guest who also suspected his sighting to be Mavalanga around the same time as your image was taken. We can see the ear markings clearly in this image so I am confident in my assessment.

It never ceases to fascinate me how these bulls can go for so long without being noticed especially with ivory this substantial, it also highlights the value of guest submissions to the project as this is how we learn about these wonderful bulls.

I have created a file for this bull and will definitely escalate him to the top of the list when the time for the naming review comes and hopefully at that time he will be confirmed as a new bull and named.

Of course the bushsnob and his wife are both very excited to have contributed to the ETP by spotting such a remarkable tusker and, hopefully, they will be kept in the loop regarding the future naming of the tusker by the ETP. 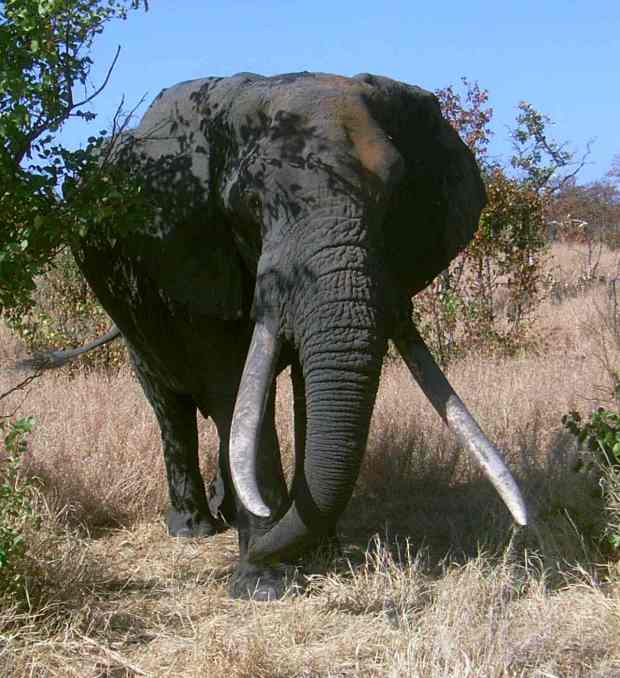