Thomas was one of our Maasai askaris[1] at Intona ranch. He liked cattle so, in addition to his guard duties, he often volunteered to take them for grazing. This was welcome as he was fearless when it came to walk in the bush and dealing with the buffalo herd that often intermingled with our cattle. It was rather amazing to see the herdsmen and Thomas separating our cattle from the buffalo herd! 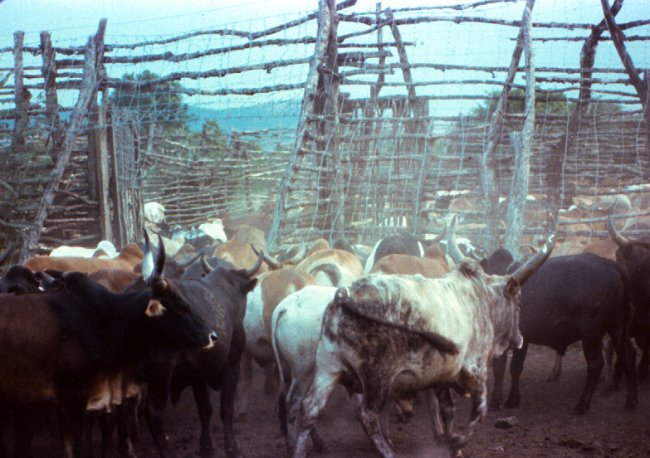 Thomas was a very friendly young man and he got on very well with the other workers so, when I proposed to the workers to join me in a fishing trip, Thomas was very keen on the idea and he came along.

During the time of the fieldwork I often travelled to Intona ranch over the weekends, as I also needed to spend time working in Muguga on the laboratory trial during the week so time was short. Although there was some work to be done on Sundays, we tried to keep this to a minimum so that we had time off to rest and relax. Being rather restless I was always looking for some activity to do during this free hours. For this visit I had brought some fishing gear as I wished to try my luck in the Migori river, one of the boundaries of Intona ranch. 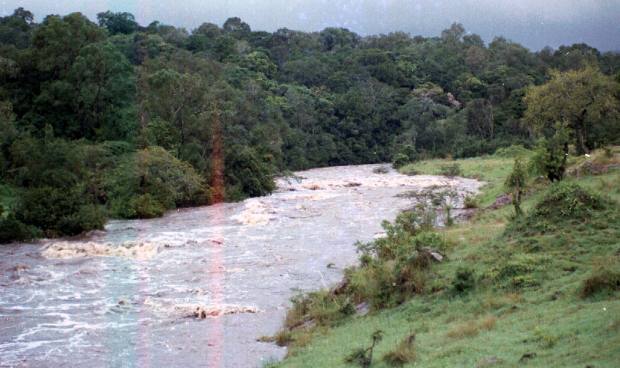 The Migori in flood. We fished from these banks.

Some beautiful trees seen near the river. 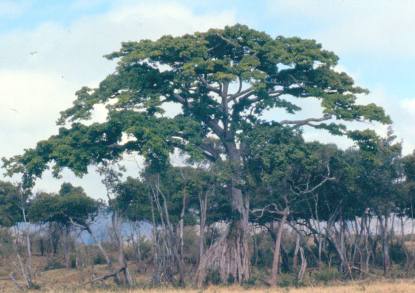 The Migori river water ends in lake Victoria after it joins the Gucha river forming the Gucha-Migori river basin. During every trip that we came to Intona via the Maasai Mara we crossed the Migori river bridge about 10 km before we arrived to Intona ranch. The area was well forested and there were a number of large fig trees in its vecinity making it a very attractive area as the shore of the river before the bridge was open grassland and seemed safe from the presence of buffalo, the main danger in the area.

It was in this bend by the river that we often saw a sounder of Giant Forest hogs[2] (Hylochoerus meinertzhageni) grazing in this clearing. As these dark grey animals were a rare sight, it was a highlight of the journey for me whenever we spotted them, as they were quite tolerant of our presence with their impressive size, the males being about 100cm high and up to 190cm long with a mass ranging from 180 to 275 kg. Their name honours Richard Meinertzhagen who shot the type specimen in Kenya and had it shipped to the Natural History Museum in England in the early 1900s.

This “hog spot” is what I chose for our fishing expedition as, apart from catching fish, I also hoped to get a glimpse of these animals towards the evening. Our fishing targets were Clarias gariepinus or African sharptooth catfish. We had fish them earlier in the Mara river just outside of the game reserve and I saw no reason for them not to be in the Migori.

After fruitlessly digging for earthworms at various places in the bush I remembered Mrs. Murumbi’s greenhouse and garden at the main house and, after a short commando sortie we managed to get a handful from the large compost kept there.

The final preparation for the fishing trip was to run a tutorial on the basics of fishing as none of my companions had done this before, as they did not come from fish-eating ethnic groups. Aware that it had taken me some time before I could master the proper use of rod and reel, I decided that I would handle these equipment and prepared a couple of hand lines for my companions to use. We chose an open field and, after a while I judged that the team was as good at fishing as it could be so we went.

We left before lunch and took some food and non-alcoholic drinks for lunch and my companions were quite excited at the prospect of trying a new activity. Thomas in particular could hardly control his excitement and this somehow dented my understanding that the Maasai did not care for fish. Maybe Thomas was the exception?

After a quick lunch under the shade it was time to try our luck. I gave hand lines to Thomas and Joseph, I kept one rod and gave the other one to Mark. As expected, the earthworms were attractive as I felt them biting as soon as my hook landed.

Somehow, Thomas got lucky and hooked something that after a short struggle with a rather thick hand line happened to be a reasonable catfish. After a short squabble he soon had it out of the water and his happiness at his feat was incredible. It held the fish with both hands looking at it and laughing while talking to it. He said that he would eat it, something I found strange but, busy with my own fishing, I did not pay much attention. So, Thomas departed to clean his fish. We continued fishing and had some bites that, regrettably, resulted in clean hooks.

Thomas and the fish!

After a while we noted Thomas’ absence but, distracted by our own fishing, did not think much of it. After a while longer of not seeing him and knowing that many dangerous animals were present, we stopped fishing and went searching for him. Joseph went one way and I took another path thinking that like that we increased our chances of success.

After walking perhaps 100 m following the river I saw Thomas seating down against a tree and I called him but did not reply. I called him again but still no reply so I assumed him to be sleeping and got closer to wake him up and then I saw his unsheathed simi[3] and the pool of blood. He had a bad cut in the palm of his right hand that was bleeding profusely and he was very pale.

I shook him and he opened his eyes and, still smiling, looked at me. He was weak but alive and, lifting his wounded hand above his head, I helped him to walk towards the car, calling Joseph to come and help. He appeared and, between both of us, we took him to the car and drove him with his hand bandaged and up outside the car towards the Lolgorian seeking medical assistance.

Maasai lived rather dangerous lives. Not only they fought often among themselves with serious consequences but also, as I described in an earlier post, they were constant skirmishes taking place at the time with the Kisii ethnical group that was moving into the Transmara. As if this would not be enough, they walked through the bush where many dangerous animals dwell. Although they do not fear them, they often suffer the consequences of encounters with wild animals, in particular with African buffaloes as these animals camouflage well and attack by surprise and without notice.

This way of life explained why the Lolgorian clinic was very busy that Sunday afternoon. Concerned about Thomas’ condition, I entered the hospital running and went straight to the emergency room asking for a doctor. A nurse pointed me to an European young guy in white that I assumed – correctly as it turned out – that he was a doctor.

I hastily mentioned that I had an injured person that needed his help and he gave me a rather tired look and motioned to me to look around. In my haste I had not paid attention to the “waiting room”! There were at least five people waiting before Thomas. A couple looked sick with malaria but the others were suffering from various traumatic accidents. I remember one that was holding his bloodied abdomen and another that had almost severed his large toe. It was clear that Thomas would need to wait.

Without much ado the doctor asked me to help him and I spent that Sunday afternoon cleaning wounds and helping him to stitch the severed toe and to close an abdominal wound caused by a buffalo horn! I was shocked by how stoic people were throughout the proceeds and this included Thomas’ stitching, comparatively a minor affair.

After finishing with Thomas, we thanked the doctor and left. During the return journey with a much more recovered Thomas, we learnt that while gutting the fish he had tripped and fell. During the fall his right hand had slipped over the length of the simi’s blade and had cut his hand very deeply.

With a much-recovered Thomas we arrived to the fishing spot at dusk where, before we collected all our fishing gear abandoned earlier, we had the privilege of watching the gian forest hogs! Thomas, now feeling strong again, collected his fish and, laughing again, assured us that he was going to eat it!

[1] An askari (from Arabic) was a local soldier serving in the armies of the European colonial powers in Africa. The term is still used today to informally describe security guards.

[2]  Listed as of “Least Concern” as they are relatively widespread, it is acknowledged that there is a general decreasing trend for the species across its range. In Kenya, Ethiopia and South Sudan Giant Forest hogs live also in very fragmented populations.

[3] A short sword used by the Maasai people with a leaf-shaped blade. It is kept in a scabbard made of wood and covered with rawhide.