Although we agreed that we were in no hurry to leave for Mana Pools National Park, somehow we found ourselves getting up early and soon enough we were on our way before what we had planned. Fortunately the road from Harare to Chirundu in the border with Zambia was rather quiet. We were able to travel fast and well until we found ourselves snaking our way up and down Marongora or the Zambezi escarpment.

This is the worse part of the journey as long lorry lines coming and going between Zambia and Zimbabwe are formed here and the pace can be very slow if not nil as frequently we find serious accidents that cause long delays. The road is littered with lorry remains to the point that we call it the “lorry cemetery”. This time, even this infamous place offered us no difficulties.

We turned into the Mana Pools turn off in good time. As usual, the first 30 km are as rough and corrugated as ever and we decided to break the journey over half way entering the track leading to the Rukomechi Research station where groundbreaking research on tsetse fly control was carried out in the 70s and 80s. The idea was to see the place and to find a place to have our lunch away from the main road.

The station was rather quiet and, after a quick drive through, we returned towards the main road, stopping at a dry river bed that we had identified early as a “lunch spot” to enjoy our sandwiches. The halt did not last long as the stingless Mopani bees (also known as Mopani flies) Plebeina hildebrandti kept getting into our eyes, a very uncivilized behaviour!

Worse still were the stinging honeybees that started coming the moment we opened our lunch boxes and kept landing on our food and drinks. Soon we were fed up with both bee types and decided to abandon our lunch break and continue our trip.

We were greatly relieved when we reached the gate into the park with the car apparently in one piece. A quick check confirmed that this was so, at least all the expected parts were there! The road corrugations were such that the usual trick of driving fast to “skim” over them did not really work and to drive slowly was even worse so we tried both hoping to get an improvement that we did not achieve! Satisfied with the toughness of our car, we continued for the final 40 km on a much smoother track. 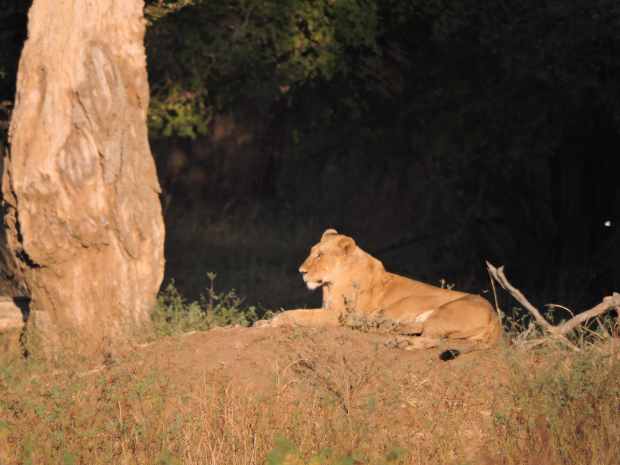 We aimed for the park’s office to check in our lodge called Nyati[1]. As it happened, a couple of kilometres before, my wife spotted a tawny shape that turned out to be a resting lioness. We stopped and for sometime forgot our immediate plans. After scanning the area with our binoculars, another two females were found. We stayed with them for some time but, as they did not seem to move, we decided to go back to our plan and to sort out our lodge. The latter was very nice, on the Zambezi River shore, clean and ready for us.

After organizing our belongings and food supplies, we decided that it was time to get back to the lions. As these are our number one interest in the bush we were happy to go and try to find them again! 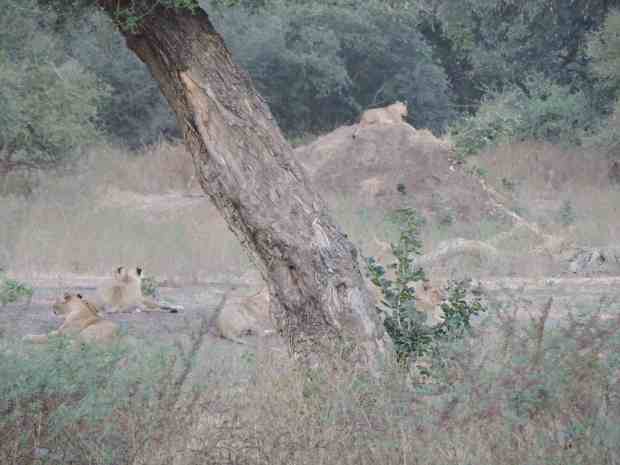 Luckily they were still there. Other visitors had also found them and two cars were watching them but, as it often happens, they soon left. I always question myself about what could be better than staying with a pride of lions waiting for action! However, more often than not, most people have other ideas and, after a few minutes, they invariably move on. I find this conduct surprising but they probably have other bush tastes such as elephants or perhaps sundowners by the river? We, the wiser, stayed with the lions.

A few minutes of observation later and we had seven individuals: six females -in excellent condition- and one young cub. We found this a bit strange as we expected more youngsters but we did not see another one. Typically, for about an hour nothing much happened. As the afternoon became evening all of a sudden they were off. It happened very fast and they entered the tall grass towards our left, leaving the cub behind.

Trying to stay ahead of the game, we moved forward looking for the reason of their exploit while trying to position ourselves at a place from where we could see what would happen next. About one hundred metres ahead we found a clearing with some male impalas grazing and, apparently, oblivious to the lions.

“Could the lionesses be after the impalas?” we asked ourselves, as these antelope are not the number one choice in a lion’s diet. We had seen lions in past years at Mana feeding on buffalos and even elephants so these rather small antelope did not qualify even as a snack for such a group! However, in the absence of other possible candidates we stopped and waited.

The impala, aware of the mortal danger it was in, quickly recovered from the surprise of the attack and ran for its life leaping and zigzagging with great skill as the terrain was uneven and bushy. Despite this, the lionesses were getting desperately close and, when all seemed lost for the antelope, it jumped and turned sharply to its right. This final feat of nimbleness put the lionesses off balance and the impala managed to escape snorting loudly as it realized that it was still alive! What I described took place over a few seconds and well before I could move my finger to take a picture! 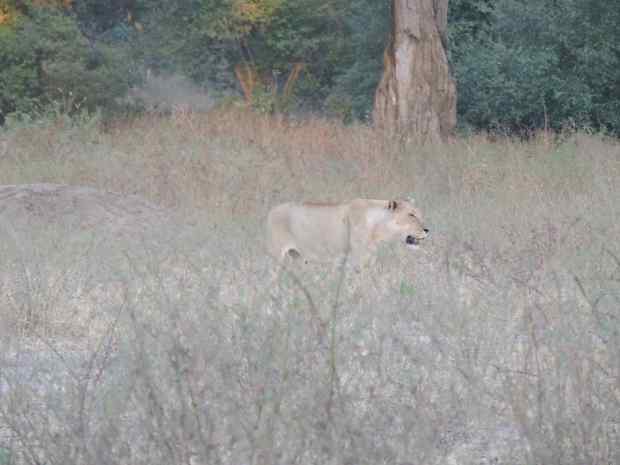 When I could press the shutter, the chase had ended…

The impala snorting was answered, to our surprise, from somewhere in the midst of the lionesses! At first we thought that the huntresses had got another impala and what we were hearing were its last throes. Soon, however, the truth revealed itself as another impala came running flat out from the “lionesses-hot area” and soon joined its colleagues at a prudent distance. We had clearly missed this impala that had turned towards the opposite side from the others and probably saved its life because of it!

The short chase over, the huntresses relaxed and one by one they broke their cover and we saw seven female lions. Realizing that the chase was over, they returned to the place where the cub was. After a while we saw another rather large head emerging from the tall grass: a large male lion could not be bothered to lose its royal status chasing impalas and wished to have a look around!

Soon the light started fading and we left them, convinced that they would hunt later on. We agreed to return and look for them the following morning but, as they can move long distances, we did not hope for another sighting.

Back at the camp the donkey boiler[2] supplied ample hot water for a good bush shower to wash off the thick dust from the already very dry Mana Pools roads. As for the various aches from the journey, I appealed to a few sips of a South African Cabernet Sauvignon, with therapeutic meticulousness! The latter also greatly helped with the writing of this post!

[2] Known as Tanganyika boiler in East Africa. It is basically a metal drum over a wood fire.