Sometime after our first enthusiastic attempt at camping in the Maasai Mara [1], I got to know Paul, a virologist working at the Kenya Veterinary Research Institute in Muguga as part of a veterinary team of the then Overseas Development Agency [2]. Paul had been a student of Sir Walter Plowright, one of the discoverers of the vaccine against Rinderpest [3]. Then he was the mainly working with the latter as well as Bovine Malignant Catarrhal fever (BMCF) [4].

At that time he was spending time in the field investigating the epidemiology of BMCF as well as the serious outbreaks of Rinderpest that were still present in East Africa.

The well known picture of rinderpest in South Africa in 1896. From Wikimedia (Public domain).

Our friendship started by having our lunches together “al fresco” under the Muguga sun and, after a few weeks, he invited me to come with him camping for a few days in the Maasai Mara Game Reserve. A while earlier, Paul had received reliable information from the chief game warden that the first few wildebeests -of the hundred of thousands present- were starting to drop their calves. It was early in the year and he needed to get there to get samples of wildebeests’ placentas as part of his studies. As I was still waiting for a decision regarding my work, I readily accepted.

So, we drove to the Maasai Mara in Paul’s series III Land Rover that had a few reinforced parts, including a bulletproof windscreen and a very hard suspension! Paul had permission to camp anywhere in the reserve and he had already selected a spot where he had established his base. During his absences the camp was looked after by his assistant, the do-it-all Tobias, a Kenya Government employee, that always accompanied Paul when camping [5]. 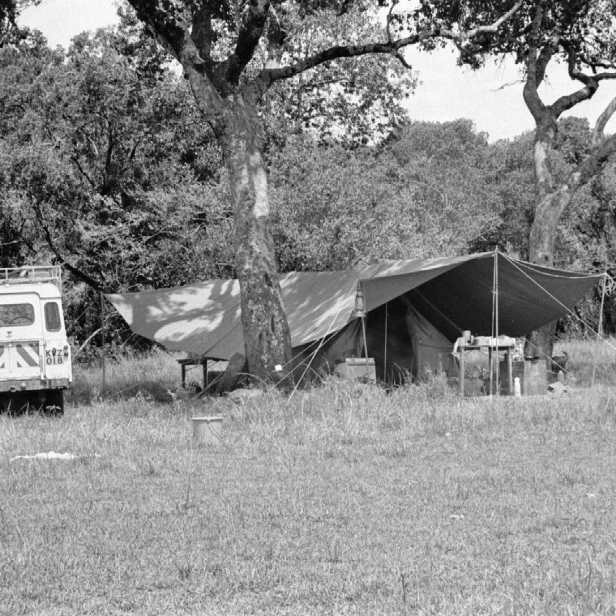 The camp during the day. 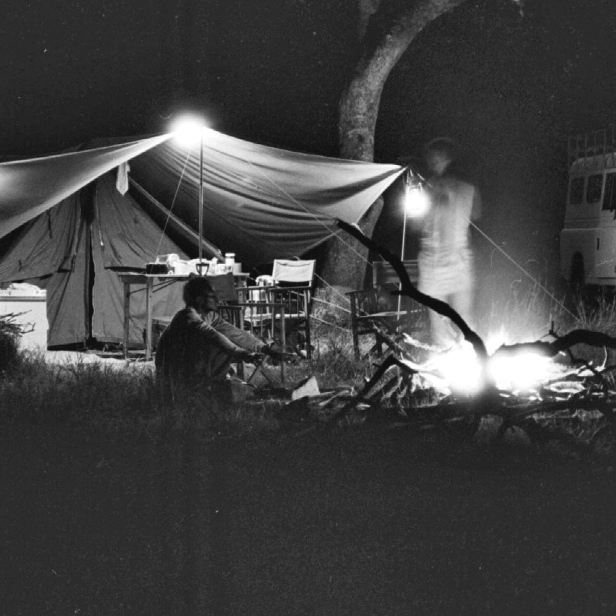 The campsite at night with Tobias and Paul. The fridge is at the back on the left of the picture.
I believe the camp was located in the Mara triangle but I do not remember its precise location except that it was a very secluded area in a clump of trees. There were two tents, a smaller one for Tobias and a large one that was where Paul stayed. On one end of the tent there was the “sitting room” and kitchen while the other was the field laboratory. As it was a large tent, we were very comfortable. Paul’s pride and joy was his Australian portable gas fridge that enabled him to keep reagents and veterinary drugs as well as food (and a couple of Tuskers) so that he could stay in the field for a few days! 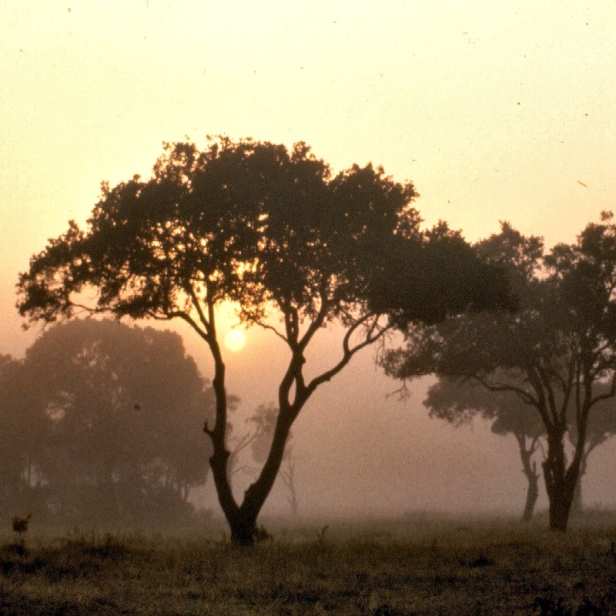 Sunrise at the camp.

The trees around camp in the evening.
The fact that we were in the middle of the bush with no fences and no other humans nearby was, at first, rather unsettling for me and I put this to Paul. He explained that he had learnt from his own experience and that of other wildlife veterinarians and field workers that animals will normally stay clear of your camp. He added that exceptions did take place but that serious accidents were extremely rare provided you did not interfere with your the wild inhabitants. “It sounds incredible but the tent will protect you against almost all animals” he said and this has been our camping creed ever since and -so far- it has not failed us.

Our task for the few days we were together was to start the collection of tissue samples from wildebeest placentas to attempt to isolate the BMCF virus. With this in mind, by the end of the first day we had located the vast herd of wildebeest and we had prepared the necessary equipment to be ready to start working the following morning before dawn. 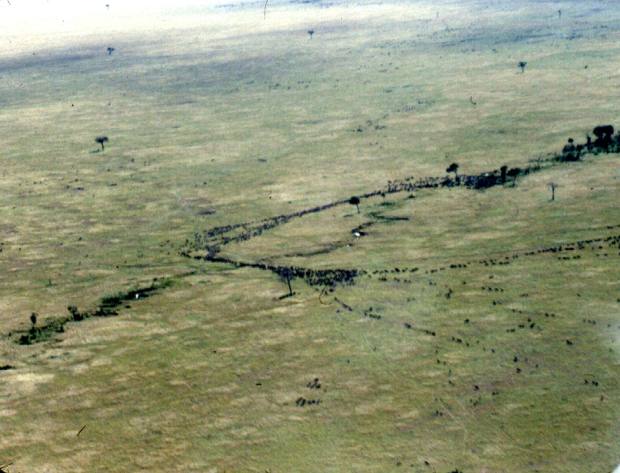 The wildebeest migration from the Oloololo escarpment.

We started our journey in the dark and in twilight we began to drive cross-country across the plains among the wildebeest until we got to our destination: a vantage position on top of a hillock. Once at the top while daylight improved we prepared our observation post by setting up a small table and chairs as well as our binoculars and a telescope.

A herd of zebra that accompanied the wildebeest.

Trying the telescope.
After some time the sun emerged and bathed the savanna with its yellowish light. What was revealed had already been announced by the intense noise that we were already hearing as thousands of wildebeest bleating, moaning and snorting.

We also heard zebras barking and braying as they were also there mixed with the wildebeests, sharing their grazing.

We immediately started watching the animals looking for arched backs and tails held horizontally, signs of a calving animal. It was not an easy job as we needed to scan thousands of animals that were constantly on the move! We had spent a couple of fruitless hours watching the animals with the only satisfaction of feeling the warmth of the sun on our backs. Then I heard Paul shouting, “there is one starting to calf” and added “let’s go”. I followed him having seen nothing!

We drove down our knoll rather fast. While Paul held to the steering wheel I held tight to every bit of the Land Rover that would resemble a handle as we hit stones and ruts that would have destroyed most cars’ suspensions. It was not a careless race but rather that our attention was fixed on not losing our “patient”.

We drove among a sea of animals and, luckily, Paul kept his bearings and eventually we found the animal. Well, in fact there were two as the calf had been born and it was a steaming miniature of its mother already struggling to stand up, drink the vital colostrum and start running to avoid predators.

We waited at a prudent distance until both animals moved away and then we descended on the placenta that was left on the grass. We have found our first placenta and took the necessary samples. We were very happy and celebrated this by taking pictures of the event as well as burying a long stake with a number to indicate the area of collection so that a GPS reading could be taken later.

We returned to our viewing point and continued watching. We waited for a long time without spotting another calving. At some stage we saw a clearing appear among the sea of wildebeests. It became gradually wider resembling the wave a boat makes when going fast on still water and then we saw that a male lion was walking through the vast herd that -amazingly- simply stared at it and just moved the minimum distance from it. “It is better for the wildebeest to know where the lion is!” Paul explained. A sighting that I will not forget!

It was clearly still early in the calving season and that first day we only got a second sample in the afternoon.

The following day, although we did not get the expected storm of births, more females were calving and the collection of samples did not require so much watching from the hill but rather slow driving among the animals looking for calving signs and then to wait for them to release the placenta to collect what we needed.

The next day our work took a competitive turn. As the calving increased, more predators started to appear, particularly the spotted hyenas that in the Maasai Mara are rather abundant so we needed to move fast to beat them to the placentas and even while one of us collected samples, the other kept an eye on hyenas, just in case!

One of our ‘competitors”!

Sadly, after a few days we needed to return to Muguga to deal with the samples we had collected so we left that true animal paradise and great work and started our drive back through the vast plains of the Maasai Mara to the Kenya highlands where Mugug and Nairobi are located.

Although I was unaware then, the fact that Paul continued to do field work there and that I (often with Mabel) started to work at Intona ranch and needed to drive past the edge of the reserve, gave us ample possibilities to meet and share lots of time in the bush where we continued learning the ways of the bush and contracted the “bush camping disease” from which we still suffer today!

[3] Following the break-through finding of J. T. Edwards in the 1920s that the infectivity of the rinderpest virus could be attenuated and used to immunize animals for life, in 1956-7 W. Plowright and R. D. Ferris obtained a stable, attenuated, and non-infectious virus, ideal for a vaccine. This was cheap to produce and safe and its use eventually -after lots of very hard work in the laboratory and in the field- led to the global eradication of rinderpest in 2011.

[4] Wildebeests carry a lifelong infection of BMCF but are not affected by the disease that is passed from mother to offspring and shed mostly in the nasal secretions of wildebeest calves under one year old. Wildebeest-associated BMCF is transmitted from wildebeest to cattle normally following the wildebeest calving period.

I have inserted (as a page on the right) a small map to orient the reader on the area we were in. Bushsnob