The distance between Carmelo in Uruguay and Salta in Argentina is about 1800 km by road so we usually divided the trip in three legs of roughly 600km each as to avoid driving too much in a day. The first stop is usually Curuzú Cuatiá in the province of Corrientes that we reach after crossing the border and a rather monotonous drive.

The second day takes us through a nice area known as the Iberá wetlands where bird life makes the trip very entertaining and interesting. Our second stop is found about 200 km towards the north-west, after crossing the mighty Paraná River in Presidencia Roque Sanz Peña, the second largest city of the Chaco Province. The main attraction of the city are its thermal waters but it also has a rather hidden treasure: a zoo of native animals. As the latter are difficult to see in the wild, the zoo helps preparing the observer for real life!

During one of the stop-overs we needed to kill time for a hotel room to be ready so we decided to defy the intense heat and spend some time at the zoo! We only learnt on arrival that mosquitoes were also on display and in large numbers! Luckily we had a strong repellent[1] otherwise the tour would have been abandoned!

Towards the end of the visit we walked passed a pond that was home to several duck species including domestic ducks. While watching the pond, we saw a few wild ducks known as sirirí cariblanco or white-faced whistling duck (Dendrocygna viduata), one of the handful of species that occurs both in South America and Africa, just like us! While making a comment about its world distribution we noticed one that had a “relationship” with a domestic duck.

As this was unusual, we watched as the whistling duck approached the much larger “friend” and placed its beak and part of its head behind the neck of the larger duck! 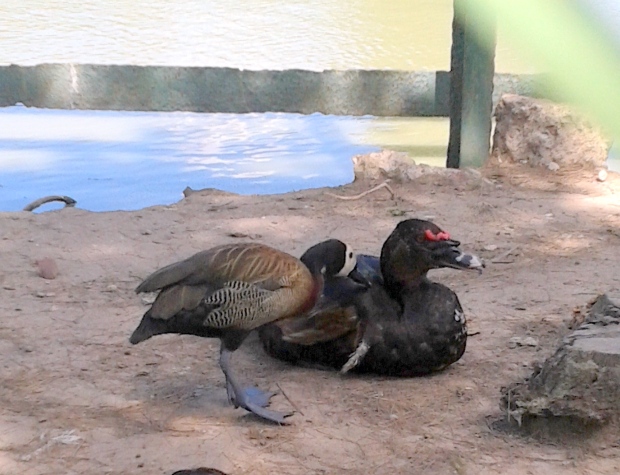 At first we thought that it was looking for something there but it just kept its head there without moving for the whole time we were there and it was still in that position when we left them! The domestic duck, clearly used to this “treatment” did not move and accepted the wild duck indifferently!

[1] Repellents in South America can make the difference between misery and enjoyment and you need strong stuff to survive the various biting insects that wait for you there!