The picture of my first view of lake Bogoria that prompted this post.

Recently, Pinkshade, a most appreciated reader, critic and contributor to this blog made comments to a poor vintage picture of lake Bogoria I shared on Facebook. This is what she wrote:

“(A) poor picture but it brings back those happy hours at Bogoria, the smell of the “maji moto” (hot water) and of the flamingoes, the noises of the water and the birds too. The souvenir of being badly stuck against a big rock with the car and going back on foot to try to find some help… that we didn’t find… and we ended up “undigging” the wheel by ourselves, sweating profusely! And the small spring, clear and refreshing, that we used to visit at mid-day for a bath, the parrots in the trees and all the fantastic atmosphere from that beautiful place… Lovely (wink emoticon).

So, confronted with that I am obliged to tell you our experiences at lake Bogoria that, to me, is the jewel of the Kenya Rift valley. I admit that my opinion may be biased as it was the first place I camped in, well really out, but more of that later. Lake Bogoria is not that far from Nairobi but it was somehow away from the normal tourist circuit that preferred Amboseli, Lake Nakuru, Lake Baringo and the Maasai Mara.

It was early days in Kenya for me and I was still alone living at Muguga House when Richard and Philip invited me to join them on a one-night visit to Lake Bogoria National Reserve. Because they used to work late, our Saturday departure got delayed and we did not make it to the park in time. We were then forced to “camp” near the entrance, under the flying pathway of the lesser flamingo flocks that seemed to be entering the lake in large numbers!

We only had one tent for two so Richard and Philip used it while I had the option of the front of the car (the back was full of our stuff) or sleeping “al fresco”. As I had a camp bed and a borrowed sleeping bag I chose the latter. The evening temperature was perfect, no mosquitoes (or mosquito net) so I was happy to sleep under the stars. The three of us were tired so, after a simple stew and rice we retired to bed early.

Murphy’s Law is always present, even in lake Bogoria so, about five minutes after closing my eyes the rain started. I resisted for a while but, when it became a true downpour, I rushed to the only shelter I had: the car as, at least it was dry. There were two seats that could not be reclined as the back was full so it was a question of sitting it out! It was a long night that I shared with the hand-brake that somehow kept getting between me and my dreams!

Despite the uncomfortable start, the first view of the lake stained pink with flamingoes and framed by emerald green hills will be forever imprinted in my mind. The sky was clear and thousands of flamingoes were flying all over the place on errands that only they knew the reason. The birds were mostly lesser flamingoes (Phoeniconaias minor); deep pink masses feeding on the blue-green algae (Spirulina platensis) that they filtered with their hollow beaks, their tongues acting like true vacuum pistons! The young, beige-white, were all together in the distance while the greater flamingoes (Phoenicopterus roseus) placed themselves in areas of the lake where fresher water was present so that they could find their invertebrate prey. The latter were, as usual, much fewer in numbers.

Frankly, I do not recall the rest of that safari but it really left an impression on me and I decided to get back there.

The opportunity to return presented itself about one year after, when my wife was with me and my work had been decided, agreed and initiated and I could afford to spend a Saturday night away from the laboratory. This time we decided to camp at the Fig Tree campsite as it offer the solid shade of these fantastic trees and a stream that, coming from the hills above the camp, meandered through and offered the needed water close by. THe water from the lake is alkaline and sulphurous and it is not drinkable. 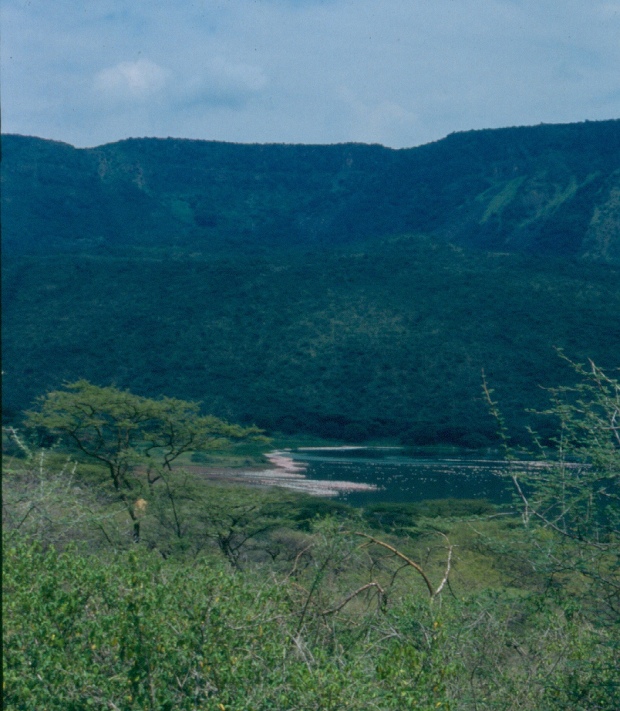 Another view of the lake.

Notwithstanding its huge flamingo population, lake Bogoria was not a popular destination so, most of the time, we were on our own and this time was no exception. We chose a good spot and organized our camp that at that time was rather basic: a tent! It was only with time that we managed to learn the science of camping and started to purchase a few more essential items, mostly second hand and from friends leaving the country. So later on we added canvas chairs, table, jerry cans and other important elements that make camping a pleasurable activity. But, more of that later as this time, it was the tent, the VW Kombi and us!

We spent most of the remaining daytime watching the “flamingo show” and driving to the various sections of the lake. The smoke on the opposite shore turned out to be volcanic hot springs that gushed from cracks in the black rocks, feeding the lake with new foetid and almost boiling water. We explored them with great care as the few animal remains we saw in the various hot pools warned us of our fate in case of an accidental fall inside these true boiling cauldrons!

Part of the hots springs as seen from the circular road.

Dusk in Kenya does not linger on as in other latitudes so, as soon as light started fading, we called it a day and drove back to camp to settle down for the night. We found a welcoming committee composed of a large troop of baboons, maybe one hundred of them spread out around our chosen area that, clearly, was also theirs! As usual, when we arrived they moved off and stayed at a prudent distance but watching us, waiting for the opportunity to snatch our food. As darkness fell, they started to climb the trees to roost while we were warming up our dinner. They were very noisy as squabbles were frequent that normally ended up with youngsters been disciplined for not respecting the established pecking order!

Eventually, calm settled among our cousins and we decided that it was also time to retire. Soon we noticed that one thing is to sleep under the stars and another one to do it “under the baboons” as unfortunately they had placed themselves just above us. I will try to be restrained while I describe the situation we faced. What we first thought were falling twigs rapidly became dung and urine! Luckily not all of them fell on our canvas but there was enough to be bothersome and very smelly. The idea of moving the tent was considered and abandoned so we decided to put up with the situation as they would soon go to sleep, we hoped. They did and so did we!

Peace did not last long though. At about midnight, a generalized racket developed and there were baboons screaming and running all over the place in total panic. Something had really scared them although we will never know what. At the time we thought of a leopard attack but maybe one of them just fell off a branch! The result was good for us as, in their panic they moved away from “our” tree and decided to settle further on. We went back to sleep as the rain started and fortunately it soon washed off most of what the baboons left behind and the air became pure again!

We returned several times to lake Bogoria and we were careful in the choice of our campsite after that event. When we visited with Nazar and Aurora (our friends from “Unpredicted friends and unforgettable dates”) we chose to camp by the hot springs that, although smelly, offered good shade and a special feature: a dishwashing machine! Of course the latter was not what you may think today but it had a much simpler way of working as you would immerse your dirty crockery in one of the small hot pools and pick it up sparklingly clean a few minutes later! That was a trick that never failed to impress visitors! 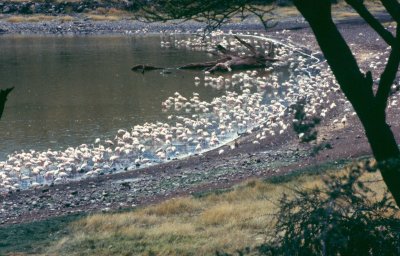 Camping at the hot springs with our Uruguayan friends.

Dish-washing made easy and the baboons’ absence at night convinced us to sacrifice beauty for peace. In addition, the fig tree camp suffered another severe blow when a good friend, while trekking up the hill from the camp, discovered that what was reputed as a cristal clear spring running through it was in fact used by the villagers up in the hills!