Before we even got to Twee Rivieren in the Kgalagadi Transfrontier Park last October, for some reason, Lola and Frank had convinced their Spanish friends that we were good at spotting lions! Although my wife is good at spotting any game -including lions if they are around- I was somehow taken aback by being attributed such a fame that generated baseless expectations… maybe I oversold myself…

So, when we arrived at Twee Rivieren there were anticipations and I was overwhelmed by the responsibility that had landed on my shoulders…

Luckily for me, it was the visitors themselves that found the lions. Well, at least they overheard the whereabouts of the lions! So, all we needed to do was to follow our visitors’ advice to find them and in this way avoid a sure embarrassment!

The lions in question (two males) were, of all places, about one hundred metres outside the camp gates and, according to our night safari guide, these pair come to this area every few weeks so we were fortunate to see them.

The predators were near the camp’s waterhole where they had killed a gemsbok a few days back so we set off to find them as soon as we had an opportunity.

It was not hard to find them as, in addition to the gemsbok that we did not see, the night before they had also killed a wildebeest and the latest kill was rather obvious! 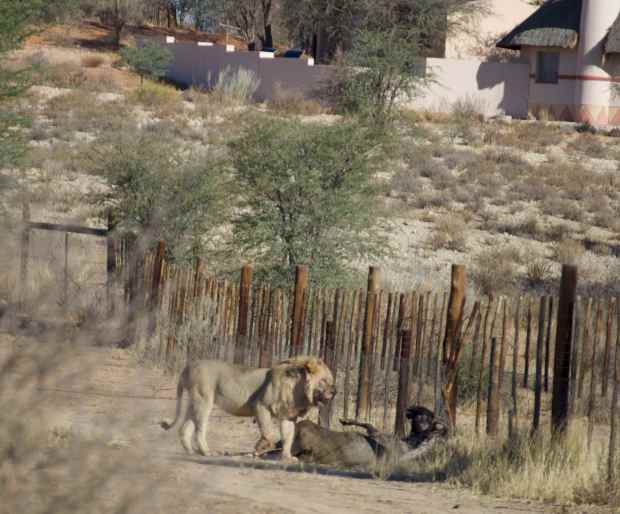 The kill happened very near the camp. Behind is Twin rivers staff accommodation on the Botswana side of the park.

Apparently, the cunning cats have learnt to use the strong camp fence in their favour by cornering their prey against it. Clearly this had happened in this instance as the victim was still somehow entangled in the fence where first one and soon both were seen feeding.

One of the lions feeding on the wildebeest. Behind is a corner in the fence where probably the trap was set by the lions.

The two males greeting each other.