Being 160 km from Nairobi made Lake Nakuru a favourite weekend escapade as it was well known for its prolific bird life. Unfortunately but at the same time inevitable, the strongly alkaline 62 km2 lake was an island inside farmland and its borders were clearly under pressure from the rural dwellers next door as well as from the town of Nakuru looming nearby and threatening this true bird paradise with its effluent. However, at the time of our visits the park offered unique birding opportunities.

A view of the lake from one of the viewpoints.

The explanation of why there are soda lakes is geological. Rift valley volcanoes spewed alkaline ashes rich in sodium carbonate that the rainwater carried to the lakes. Those without drainage allowed the sodium to accumulate and the water became alkaline. All alkaline lakes are near a volcano: Lake Natron (Tanzania) and Lake Magadi (Kenya) are near Shombole and Olorgesailie respectively, lake Elmenteita near Eburu crater, lake Nakuru near Menengai crater and lake Bogoria near the Laikipia volcanic escarpment.

Lake Nakuru National Park, including the lake itself, has 188 km2 and it was created to protect the soda lake that gives it its name and that lies in the center of the Rift Valley following the arrival of more than 1.5 million of flamingos to the lake in 1960. In 1961 the famous American bird artist and author Roger Tory Peterson called the massed flamingos on the lake “the world’s greatest ornithological spectacle” and this prompted the authorities to declare it a National Park in 1963, mainly as a bird sanctuary.

Clearly the flamingoes, both the lesser flamingoes (Phoenicoparrus minor) and the greater ones (Phoenicopterus roseus) were still the main attraction at the time of our visits and they alone justified the trip although the park had an amazing bird wealth as well as several interesting mammal and plant species. The lesser flamingo, by far the most numerous, had dark pink plumage as well as a magenta beak with a black tip. The greater flamingo was larger and had a pink bill and a whitish-pink plumage.

From afar and from the various viewpoints that surrounded the lake they could be seen as a wide pink ring enclosing the lake’s water and flying over the water continuously changing positions. Approaching the shore the ring would start vibrating and soon transformed itself in tens of thousands of birds feeding, displaying, fighting, taking-off, landing, being attacked by predators from both land (baboons and hyenas) and air (birds of prey of all sorts). 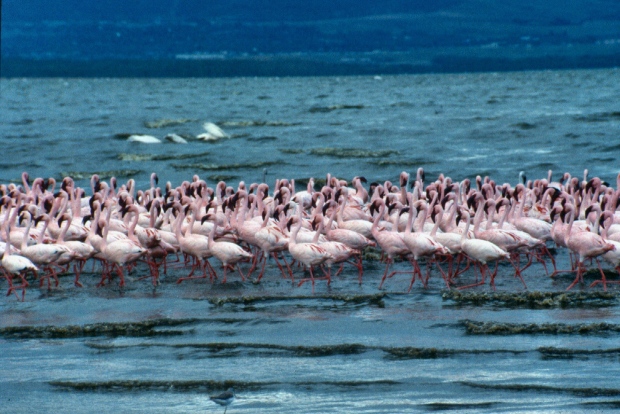 Surprisingly the two flamingo species do not breed in Nakuru and they are only there to feed, their numbers largely determined by food availability and this, in turn, depends chiefly on rainfall. If conditions are not right they move to other rift valley lakes, notably Bogoria.

The lesser flamingoes feed almost exclusively on the free-floating algae that grow only in alkaline water. These algae, known as Spirulina, had grown over thousands of years and the millions of flamingoes that feed on them are the final result. With their heads upside-down, their tongues pump the water that gets filtered in their specially modified spongy beaks trapping the algae. To thrive they need about 150g of food per day, that had been calculated to be a total of 150 metric tons per day to feed the more than a million birds that constituted the Kenya bird colony!

The greater flamingo, much less numerous, fed on shrimps and small fishes and they were present in most lakes, including sometimes in the freshwater ones.

For some visitors the lake was as beautiful as treacherous. The road around the lake was an innocent looking track made of volcanic ash and soda that, although it was dry, it was in fact very soft and muddy below. Some motorists ignored the warning signs and their car wheels would break through the thin crust and sink. They would then find themselves helplessly buried in soft and sticky ash and it was not unusual to find abandoned cars waiting for the park authorities to be able to enter with a tractor to recover them!

Although we admired the flamingoes, the great white pelicans (Pelecanus onocrotalus) were our favorites. Their numbers estimated at nine thousand, they stayed apart from the flamingoes and mainly grouped at the southern end of the lake at the appropriately named Pelican Corner where, in a horse shoe formation dipping their heads in unison they would feed on Alcolapia grahami, an alkaline-tolerant fish very close to the Tilapia species. The group surrounded and gradually forced fish into shallow and warmer water, flapping wings and plunging bills to catch them along the way.

But it was flying that they were truly astonishing. When the air’s temperature started to increase they would take off and, like the vultures do, find the right upward-moving thermals and climb until they reached the right altitude and then they would move on like a squadron of bomber planes, hardly beating their wings towards other lakes such as to Naivasha to the south. Although they can be seen as ugly on land, they are one of the most graceful birds I have seen flying!

Bird life was so prolific and abundant (more than 450 species of birds had been recorded at the time we were there) that a challenge we aimed for when we felt active enough was to get up early in the morning and return for “brunch” having spotted one hundred different species! Perhaps because we were not “true” birdwatchers we never achieved this goal but it was not rare to arrive at 80 species and above every time we attempted it!

Lake Nakuru is very picturesque as it is surrounded by several volcanoes: to the north is Menengai crater, northeast the Bahati hills, east by the Lion hill, south by the Eburu crater and west by the Mau escarpment. The road around the park was a great way of seeing the lake and its many features as well as seeing how close the farmers were on the other side of the fence!

It was a long drive to complete the circuit as the lake has a surface of 62 km2. The road went through rocky hills and our favourite were the Baboon cliffs that, in addition to the strong hyrax urine smell, offered great views across the lake. It was from there that we watched the pelicans fishing and flying. 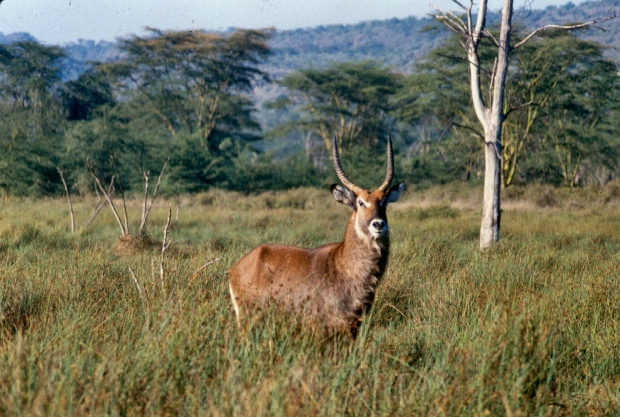 Defassa waterbuck predominated in the areas of high grass and hippos were present in the northeastern corner of the lake where the alkalinity of the water was lower because of the entry of fresh water from the Njoro river and other springs. There was a small pod of hippopotamus living in that area. Nakuru was also a good place to see Bohor reedbuck and black and white Colobus monkeys.

Rotschild’s giraffes were successfully reintroduced in the late 70s and a rhino sanctuary was started in 1987 that was managed by our friend Jock, the one that we had met in Naivasha earlier. Unfortunately, despite several invitations, we never visited it as we were getting ready to move from Kenya at the time the sanctuary started.

The absence of lions and the few buffalo present made the park safe for limited walking and, although spotted hyenas would visit your camp nightly, they never troubled us and, over the several years we visited the park, we only saw a leopard once from the car while driving after sunset.

Some of the few buffalo we spotted in Nakuru.

We always camped near the main entrance at a grassy campsite under the shade of very large yellow bark acacias (Vachellia xanthophloea) in the company of the beautiful black and white colobus monkeys as well as the less pleasant visits of vervet monkeys and baboons. The place provided great freshness and I recall spending long hours writing scientific papers there while Mabel put up with me walking about the camp always finding entertainment and finding interesting things to watch.

When our Uruguayan lady friends Elcira and Marta came to visit us in Kenya as part of their life-long world-trotting, Nakuru was the place we took them camping, precisely because of its safety and the spectacular sight of the thousands of flamingoes and other birdlife. It was a great success and we spend a long time watching the flamingo antics [2].

Nakuru has diverse vegetation including woodlands with sedge marshes, dry and seasonally flooded grasslands, and various types of dry wood and scrubland that occupy the land between the lake waters and the escarpment and ridges. Of note are the patches of large yellow bark acacia woodlands as well as the nicest Euphorbia candelabrum forest near the Lion Hill Camp.